Aurelian Smith Jr.[5] (born May 30, 1955) is a semi-retired American professional wrestler, and the son of former wrestler Aurelian “Grizzly” Smith. He is best known by his ring name of Jake “The Snake” Roberts, and often brought snakes into the ring, most famously a python named Damien.

Throughout his career he was known for his intense and cerebral promos, his dark charisma, his extensive use of psychology in his matches, and has been credited as inventor of the DDT maneuver, which has been named the “coolest” maneuver of all time by the WWE.[6] Roberts was also one of the subjects of the 1999 documentary film Beyond the Mat. In 2012, Roberts moved in with fellow wrestler Diamond Dallas Page to seek help in getting his life back on track following years of alcohol and drug abuse. He was inducted into the WWE Hall of Fame by Page on April 5, 2014. 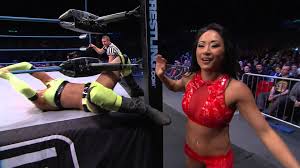 She began her career wrestling as La Felina on the Canadian independent circuit, before joining WWE in 2002 as Gail Kim. In her WWE debut match, she won the Women’s Championship, becoming the first WWE Diva in history to win a championship in her first match. After being released by WWE in 2004, Kim joined TNA in September 2005. There, she joined the tag team America’s Most Wanted as their valet. After the dissolution of the group, Kim performed as a singles wrestler, eventually going on to become the inaugural TNA Women’s Knockout Champion in October 2007. She later left TNA in August 2008, to return to WWE three months later, making her televised return in March 2009. She announced on August 5, 2011 that she had quit WWE via her Twitter account. The following October she returned to TNA. In 2012, Pro Wrestling Illustrated named Kim the number one female wrestler in the world.

STARTING FRIDAY NOVEMBER 7TH at MIDNIGHT, THE BRUCE COLLINS SHOW WILL AIR LIVE AT MIDNIGHT/ 9pm PACIFIC at WWPR 1490 AM in TAMPA, Florida. You can listen online at that time here: http://tunein.com/radio/WWPR-1490-s23839/ It will be archived at www.fringeradionetwork.com a week later… Spread the word (thanks)!

BRUCE COLLINS is a former pro wrestling promoter, an author of three published books (one of them with Brett Wagner, the host of The Speed Channel’s PASS TIME and voice of Monster Garage and another book with Ric Drasin, the middle Hulk in the 1970’s Incredible Hulk tv show with Bill Bixby and the creator of the Gold’s Gym logo) and the former book reviewer of Monster Radio, which was nationally syndicated in 84 radio markets. Bruce has hosted The Bruce Collins Show (and its’ genesis known as The Big Finale) since January, 2006. The Bruce Collins Show graduated to AM radio in 2009 and spent two years broadcasting at WSMN 1590 AM in Nashua, New Hampshire and WWZN 1510 AM in Boston, MA. Currently, the program resides online at www.fringeradionetwork.com and at WWPR 1490 AM, Tampa Florida . Based on the AM radio exposure, he was approached by the History Channel’s Decoded TV (with bestselling author Brad Meltzer) to audition for their program. After learning he would have to interview occultists and numerologists without expressing his own opinions, he turned down the invitation. Bruce’s grandfather was a Pastor in various locations in the United States for over 50 years.  Bruce is the self-proclaimed Baron of Broadcasting and the ‘Clown Prince of Doom’.

CHAD MILES is the co-host of The Bruce Collins Show. He is also a former contributing editor for Defense Watch Magazine and former contributor to The Michigan Journal. In 2006 Chad ran for a seat in the U.S. House of Representatives in Michigan’s 14th Congressional District. He served seven years on active duty with the 82nd Airborne Division, 2nd Infantry Division and the 5th Special Forces Group. His Military service as an infantryman and intelligence analyst took him around the world with service in the countries of Jordan, Egypt, South Korea and Panama.  Chad is a member of the Veterans of Foreign Wars and the American Legion. He was the creator and founder of the wildly popular Hearken the Watchmen website which featured articles from Chuck Missler, L.A. Marzulli, Michael Hoggard and many others. Miles appeared on Coast to Coast AM with George Noory to talk about drones over Miami, Florida. Chad is known as “The Odometer” and “Captain Doomsday.”

If you are a podcaster and would like to Join the Network, let us know.  We are looking for both christian and non christian shows.  Anything Fringe.  Most are welcome here.  Email fringeradionetwork@gmail.com

We also have the best LIVE streaming servers on the planet if you are a host that likes to be LIVE!